Beginning of the year I switched my blogs build chain from Travis CI to drone CI. Due to some tasks with Azure DevOps at work I wanted to test how good it fits my private projects. In this post I will NOT tell you how to set up your pipelines project because Microsoft has great docs for that. Instead this post will cover how to best put your build workflow into a pipeline specification. In addition I will cover the necessary steps to migrate existing CI/CD workloads from Travis and drone to Azure Pipelines.

Readers should be familiar with bash, yaml and basic docker concepts.

Azure Pipelines is part of the Azure DevOps* service. The service aims to provide a web based collaboration platform with issue management, git hosting, test and release management. Similar to the Atlassian stack (Jira + BitBucket + Bamboo) or the GitLab stack.

See the announcement Microsoft made last year about the introduction of the service for details.

The single service that was Visual Studio Team Services (VSTS) is now becoming a new set of Azure DevOps services. Throughout our documentation and websites, and in the product, you’ll start to notice new icons and names for Azure DevOps and each of the services within it:

Although the default way pipelines are configured is the UI on dev.azure.com I strongly advise to use the new YAML based configuration method. This way you can to configure (almost) your entire build behavior versioned with your sourcecode. The YAML syntax also allows multi-stage builds.

The YAML hierarchy has (starting on the lowest level):

Without specifying stages and job concurrency the jobs in your pipeline will run in parallel. If one step in a job fails the job will stop executing but other jobs will continue executing.

Multiple Jobs within a pipeline are a Fan-Out scenario as they get executed in parallel. 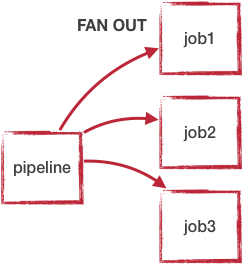 By specifying Stages you can execute fan-out and fan-in multiple times within your pipeline. Each Stage represents a fan-in operation where all defined jobs need to finish before the next stage is triggered which can fan-out again.

Looking back at the hierarchies existing the YAML file the actual execution pattern can be described with the state machine below. Only one stage is executing at a time; if possible all jobs within this stage are executed in parallel.

Migrating from drone to Azure Pipelines 🚐

The first CI/CD workload I moved to Azure Pipelines was this blog. As you can see in the image below, this is a very simple pipeline with just a few steps and no fan-in/fan-out behavior.

The drone pipeline was already relying on a custom docker image as described in this previous blog post about rendering asciidoc in hugo. That made the migration quite easy as there is not a lot of customization to the build agent necessary. All required tools to run the pipeline are encapsuled in that docker image.

I played around with various plugins available on the DevOps marketplace for Docker, Hugo and GitHub pages deploy but they either did not support the use case I have or ran outdated versions of the tools and did not let me update. Now let’s compare the actual pipeline definition.

You can find the drone CI definition and Azure Pipelines YAML in my GitHub repo.

The necessary steps for this migration were:

Another project I migrated was a simple Node.js project azure-keyvault-secretstore. Previously the build was done via Travis CI and only used the default Node.js behavior of Travis; doing an npm ci (install dependencies) and npm test to run any tests. However this one used a build matrix to execute tests on multiple Node.js versions in parallel. This is something Azure Pipelines supports as well with the strategy:matrix property.

Comparison of the two configurations shows only slight differences in the syntax and the fact that Travis auto-assumed npm test as a default command in Node.js environments

Some things to look out for when using Azure Pipelines 🐞

Here are some things that I learned over time and I hope will be fixed soon.

Scheduled jobs only run when people use the UI

As described in the FAQ of Pipelines a scheduled job only runs ONCE after the last person logs out (active session) the Azure DevOps UI.

My build didn’t run. What happened?

Someone must view a page in your organization regularly for CI and scheduled builds to run. It can be any page, including, for example, Azure Pipelines.

Your organization goes dormant five minutes after the last user signed out of Azure DevOps. After that, each of your build pipelines will run one more time. For example, while your organization is dormant:

This is by far the worst restriction that Azure Pipelines has in my opinion. It basically will not run nightly builds over the weekend.

By default pipeline executions are removed after 30 days

This is something you can - and probably should - reconfigure. You can actually set this value to as high as 2 years. So I do not understand why the default is just a month.

The worst thing is that Keeping a run not only means keeping the logs but actually after those 30 days Pipelines does not even know there ever was a run. The image below was taken today, where the last commit - and pipeline execution - was more than 30 days old. It seems like the pipeline never ran at all.

I wish they just deleted the logs but kept the meta-data like date, run result and related commit ID.

Having used Travis CI, drone and GitLab CI before I have to say the YAML syntax just feels bloated. There are many more things you can configure compared to Travis but after the few pipelines I built I already found that these options often do match my use case and I end up writing hand-crafted inline scripts instead of using the provided tasks as well.

In Azure DevOps you can have a project that has multiple repositories and multiple pipelines. There is no 1:1 relationship between repos and pipelines. Multiple projects are grouped into an organization.

This was new at first because most CI services out there just create one project/pipeline per repository. Even after several weeks I do not really get familiar with this additional layer that the project represents.